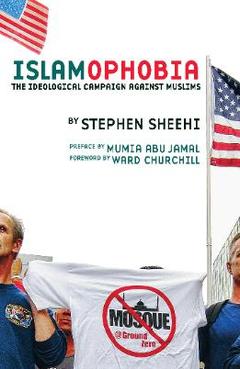 Islamophobia: The Ideological Campaign Against Muslims (Atlanta: Clarity Press, 2011) examines the rise of anti-Muslim and anti-Arab sentiments in the West following the end of the Cold War. Sheehi analyzes the relationship between United States foreign and domestic policies and the mainstreaming of Muslim-baiting rhetoric as articulated by “rogue academics,” journalists, and national leaders from across the political spectrum. He shows how Islamophobia is expressed not only in the media but also state policy and American civil society. The book has been translated into Arabic as al-Islamofobia: al-Hamlah al-idiulujiyah dud al-Muslimin translation by Fatimah Nasr (Cairo: Dar al-Sutour, 2012).

"Sheehi's analysis of Islamophobia as an ideological formation brings a much needed dose of fresh air, and analytical clarity, to the burgeoning field of research on how the a deep-seated psychological fear of Islam and Muslims has been produced and circulated to enable not merely war, but a globalized militarism of historically unprecedented scale that most Americans have come to take for granted as necessary and inevitable in the post-September 11 world. A worthy update of Said's seminal discussion of Orientalism and one that leaves few players in the contemporary foreign policy establishment, in particular so-called liberals, unscathed."

"Stephen Sheehi's Islamophobia: The Ideological Campaign Against Muslims is a brilliantly synthetic work; a gift to all who struggle to understand the anti-Muslim sentiment so pervasive in contemporary America. In a richly detailed yet accessible manner, Sheehi tackles post-Cold War American Islamophobia in all of its complexity, weaving together its liberal and neoconservative strands, and illustrating that we must interrogate it not as a problem of "prejudice" or "misunderstanding," nor as a debate about Islam itself, but as an ideological paradigm used to structure and justify U.S. policies, both domestic and international."

"Sheehi conceptualises Islamophobia as an ideological formation within the context of the American empire. Doing so “allows us to remove it from the hands of ‘culture’ or from the myth of a single creator or progenitor, whether it be a person, organisation or community.” An ideological formation, in this telling, is a constellation of networks that produce, proliferate, benefit from, and traffic in Islamophobic discourses. These networks are made up of key individuals, such as intellectuals, media pundits, academics, journalists, businessmen and industrialists, politicians, state officials and collectives, such as lobbies and political action committees. These individuals and collectives — embedded in various organisations, think-tanks, university programmes, and policy institutes — facilitate and operate at the nexus of corporate and state power in America. The alliance, or at least alignment, “between neoconservatives, democratic hawks, evangelical Christians and hard-line American Zionists and their pet ‘intellectuals’ attest[s] less to a conspiracy than to a systematic structure by which political interests, political ideologues, economic interests and policy makers symbiotically serve each other’s interests.” These networks, however, do not plan behind closed doors about destroying Islam. As a political class, these elites of varying political beliefs are brought together by common interests: empire and capital. This ideological formation is the scaffolding upon which the present-day American imperial machine is constructed and to which its workings pinned... Islamophobia, as Sheehi shows, is about power and domination; Islam and Muslims, as ciphers to be utilised instrumentally towards that end, are somewhat incidental to it. As an anti-Islamophobia strategy, defending Islam, portraying and representing it in positive light, or showing Muslims as model human beings and citizens is at best ineffectual, and at worst, one that is beholden to the very framework of Islamophobia."